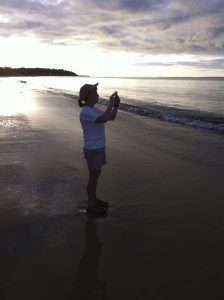 The concept of Ocean Literacy originally began to develop in the US in 2002. This was in response to the fact that ocean topics didn’t fit neatly into science disciplines and were mostly ignored in formal K-12 education. Even more telling was the fact that there was no systematic teaching about the ocean, even in US states such as California and Hawaii. If marine education did occur in US schools, it was marginalized, localized and idiosyncratic. Added to this was a perceived lack of rigor and innovation in marine education, basically it was seen as a “soft” science.

As a result, curriculum reform in the US constantly left marine educators behind. One of the other key issues was the realisation that there was no consensus on what was important to include in the classroom, even amongst the marine education community in the US. The result of this was the inescapable fact that the American public were largely ignorant of the importance of the ocean in their lives.

You don’t need to look around too far to see that the situation here in Australia, and the wider Australasian region, is exactly the same.

The great news is that between 2002 and 2005 our marine education colleagues and marine scientists in the US worked collaboratively to address these important issues. The result of their efforts was the concept of Ocean Literacy.

Next: What is Ocean Literacy?